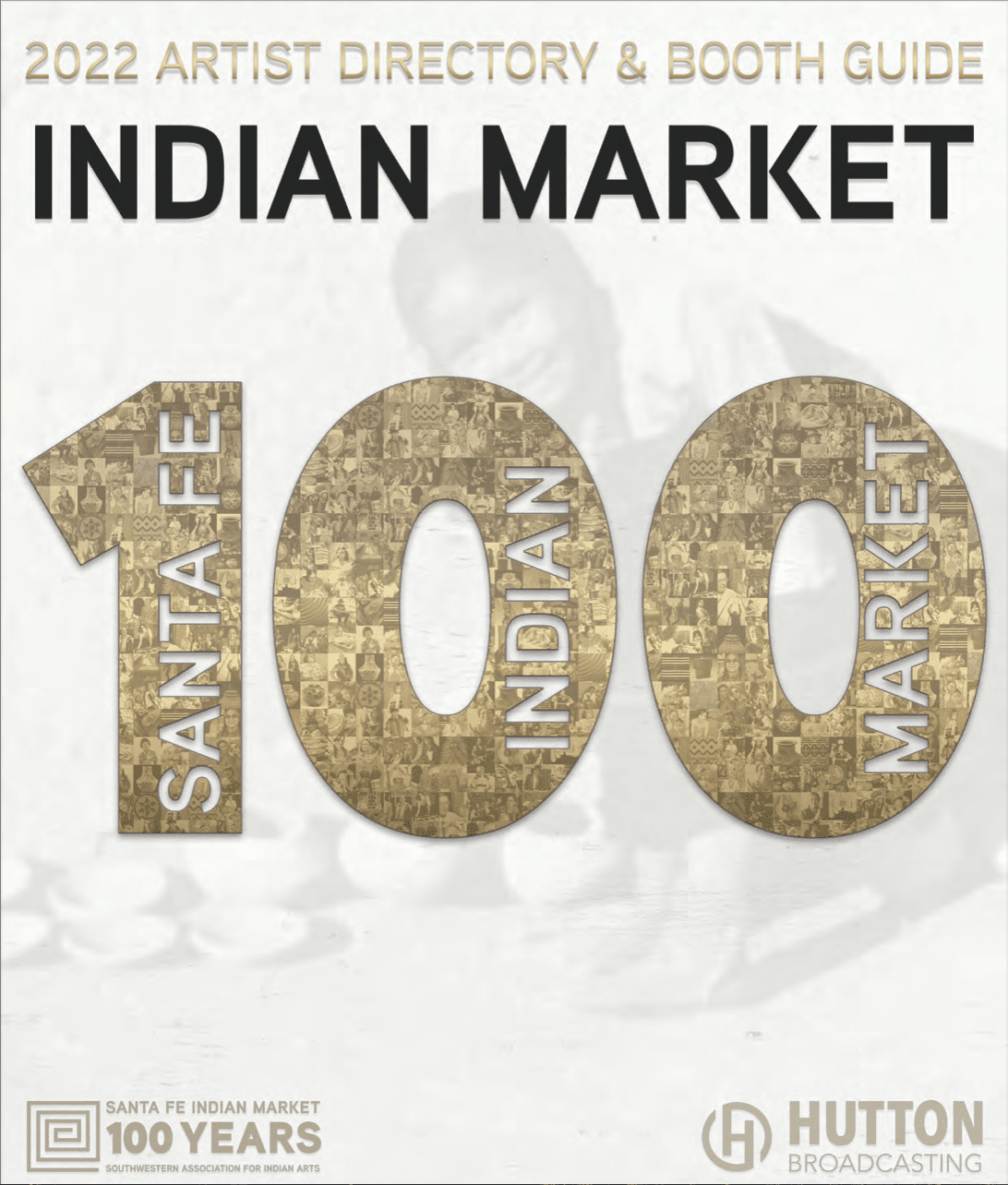 A new board will guide us through our Centennial Year.

SWAIA is proud to introduce our newly elected executive committee and board members. Stephine Poston (Sandia Pueblo), who has served on the board for the past four years, as well as a previous term from 2010 – 2015, has been elected Board Chair. She succeeds Tom Teegarden and brings many years of experience as a communications leader within the Native American community.

“I am honored to help usher in the Centennial of the prestigious Indian Market. We are a diverse board with a common commitment to SWAIA’s mission: bringing Native arts to the world by inspiring artistic excellence, fostering education and creating meaningful partnerships. I thank Tom Teegarden for navigating the pandemic waters and creating a pathway for the Centennial,” Stephine says.

“We are delighted with our new board, which includes leaders in tribal business and Indigenous art, and speaks to the health of our organization,” says Kim Peone (Colville Confederated Tribes/Eastern Band of Cherokee), SWAIA Executive Director.

Learn more about SWAIA’s board members below: 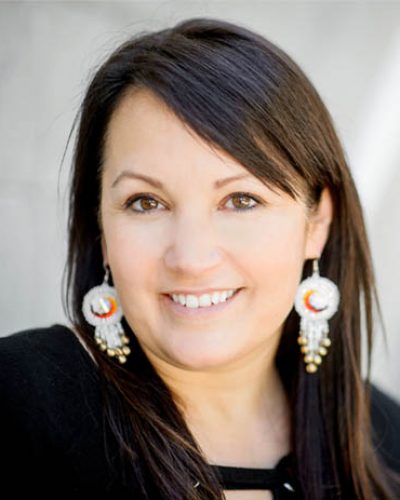 Angelique Albert, a member of the Confederated Salish and Kootenai Tribes of the Flathead Reservation, has dedicated her professional career in service to tribal communities and creating positive impacts. As the Chief Executive Officer of American Indian Graduate Center (AIGC) & AIGC Scholars, she leads the Nation’s largest scholarship provider to Native students. Under her leadership, AIGC’s revenue has increased from $4 million to nearly $33 million.

Ms. Albert comes from a family of artists and began creating Native artwork as a young child, by the age of thirteen she was beading, promoting, and selling her highly demanded works. Angelique’s talent and training in traditional art have won her numerous awards in areas such as clothing, accessories, pipes, beadwork, and dolls. Including 4 first-place awards and a best-of-show award from the Santa Fe Indian Market in the late 90s. Ms. Albert’s art career includes owning an art gallery, placing at the Heard Guild Indian Market, and being juried in as one of thirty-eight artists to show at the Smithsonian National Museum of the American Indian Art Market in Washington DC.

Ms. Albert’s experience goes beyond traditional arts, she has over 25 years of experience in various roles in philanthropy with local and national nonprofit organizations. Ms. Albert currently serves as a member of the Obama Foundation’s MBKA Advisory Board. In addition, she serves on the Advisory Board for the MBA-AIE program at her alma mater, Gonzaga University. Ms. Albert has a B.A. in Human Services and an MBA with a special emphasis in American Indian Entrepreneurship from Gonzaga University. 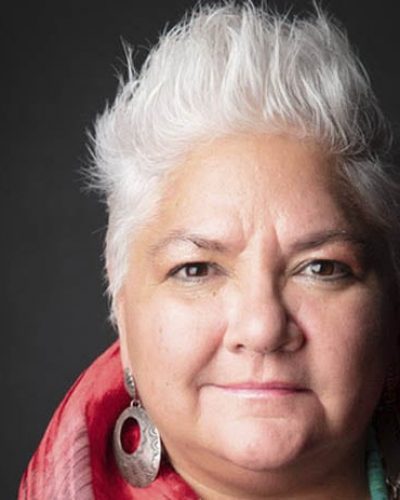 JoAnn Chase, a Mandan, Hidatsa and Arikara Indian, was born and raised on the Fort Berthold Indian Reservation in central North Dakota. After a stellar academic career that included undergraduate work at Boston University, a legislative fellowship with Congresswoman Barbara Boxer and law school and law review editorial board at the University of New Mexico School of Law, she had a distinguished law career devoted to legal advocacy to promote and protect the rights of tribal nations and their citizens.

JoAnn served as the Executive Director for the National Congress of American Indians, the oldest and largest national Indian organization. During her tenure, the organization’s membership and budget tripled and NCAI enjoyed unprecedented visibility and viability. JoAnn left NCAI to become Executive Director of the National Network of Grantmakers, an organization dedicated to moving more philanthropic dollars to economic and social justice initiatives. After her tenure there, she started The Chase Group where she puts together strategic funding partnerships with foundations, major donors and others to advance equity and social justice. (Source: The Praxis Project) 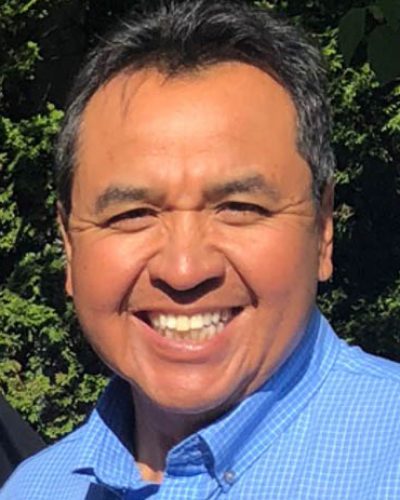 Randall (Randy) Chitto is an acclaimed clay artist whose works are in numerous museum collections, including The Heard Museum in Phoenix, Arizona, The Denver Art Museum and The National Museum of the American Indian in Washington, DC, among many others. His work are also shown at the Santa Fe Indian Market (SWAIA), Heard Indian Market and other select exhibitions.

Randy grew up in Chicago, Illinois, moving there with his family from the Choctaw reservation in Mississippi.

Randy is a past winner of the Southwestern Association for Indian Arts Fellowship and a Dubin Fellow at The School of Advance Research, formerly The School or American Research. Randy has accumulated many other awards and distinctions in his career.
His studio, The Red Clay Studio is located in Santa Fe, New Mexico.

In 1980, Randy enrolled at The Institute of American Indian Arts (IAIA) in Santa Fe. His main interest at the time was painting, but it was there he found clay. Otellie Loloma was his first instructor in a medium he had previously not worked with. He continued his study in clay with instructor Ralph Pardington, a mentor and friend.
Under Mr. Pardington developed his unique style.

He also took painting classes with the renowned artist and instructor Linda Lomahaftewa at IAIA. In 1983 , he graduated with both a two- and three- Dimensional Degree in Studio Art.
Randy is married to his bride of 36 years, Jackie Carpio, whom he met in Mrs. Loloma’s clay class. Randy and Jackie have two boys, Hollis and Dillon. Hollis is an acclaimed, award-winning artist and Dillon is an accomplished playwright.

Randy has served on many boards for several non-profits organizations in Santa Fe and along with Jackie co-founded the Santa Fe Indian Center. 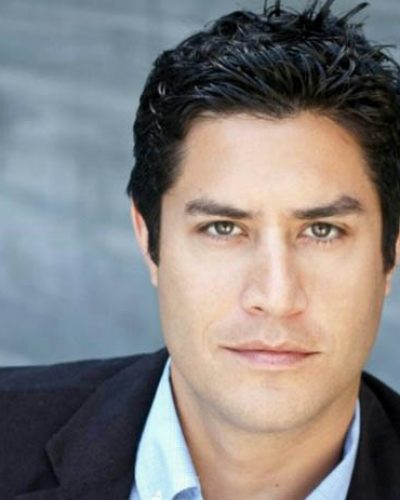 Elias Gallegos, is a film actor, and producer. Born and raised in Santa Fe, NM. He is also the Film & Media Director for renowned author and filmmaker George RR Martin. 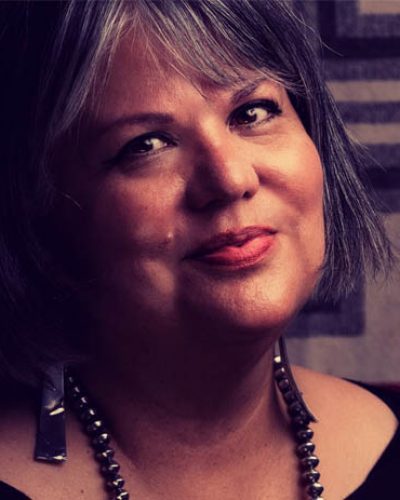 Andrea R. Hanley (Navajo) is the chief curator at the Wheelwright Museum of the American Indian in Santa Fe, New Mexico. Her career has been guided and dedicated to the work of contemporary Native American artists and the Native American fine art field.

She started her career at the National Museum of the American Indian, Smithsonian Institution, Washington, D.C., as both special assistant to the director and exhibition developer/project manager. She was the fine arts coordinator/curator for the city of Tempe, the executive director of ATATL, Inc., a national service organization for Native American arts.

She was the founding manager of the Berlin Gallery at the Heard Museum and the membership and program manager for the IAIA Museum of Contemporary Native Arts. She currently serves on the Santa Fe arts commission. She is on the UCross Foundation national advisory council, and the Native American advisory board for New York based arts organization, Voices in Contemporary Art (VoCA.) 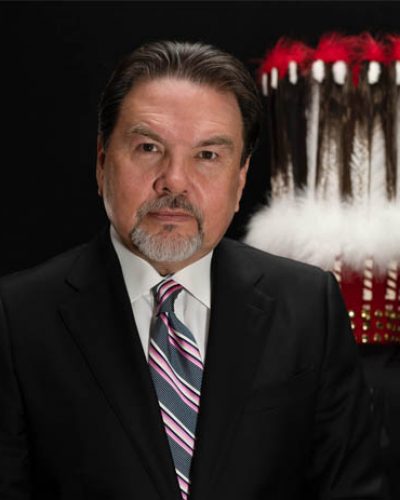 Walter Lamar, an enrolled member of the Blackfeet Nation of Montana and a descendent of the Wichita Tribe of Oklahoma, provides law enforcement and security consulting services to tribal governments. His career in law enforcement included 18 years with the Federal Bureau of Investigation, where he served as a Special Agent/Supervisory Special Agent until 2000, when he was named Deputy Director of the Bureau of Indian Affairs, Office of Law Enforcement Services. In response to the attacks of 9/11, the Department of the Interior named him Senior Advisor to the Director, Department of the Interior – Office of Law Enforcement and Security, where Walter served to ensure protection of the Nation’s dams, monuments and icons.

Walter retired from Federal service in 2005 and founded Lamar Associates, a company focused on the safety and security of Indian Country.

In 2015, Walter served as a Senior Advisor to the Director Pentagon Force Protection Agency, and in that capacity worked with agency managers to ensure protection of the Pentagon. 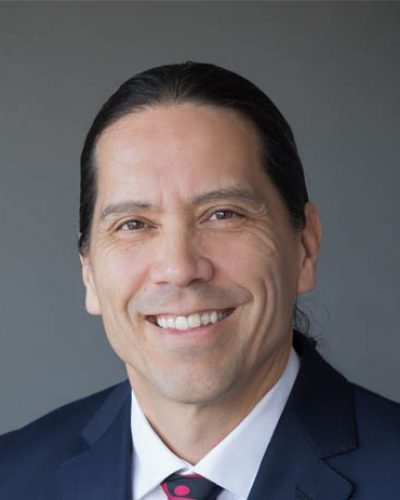 Bill Lomax is dedicated to empowering Native American Tribes with financial strategies and education that enable long-term, multi-generational economic growth. As a wealth management leader, Bill has built Indigenous-focused wealth management businesses at firms such as Goldman Sachs, Merrill Lynch, and Smith Barney. A member of the Gitxsan Nation in British Columbia, and prior Senior Portfolio Manager for one of the most successful Tribes in the US, Bill combines his expertise in wealth management with his first-hand knowledge of Indigenous governance and culture in order to transform the complexity of investment management into insightful strategies for Native American Tribes across the US.

Bill is frequently invited to speak at many Native American and First Nations events in the United States and Canada. He is the Immediate Past Chair of the Board of Trustees for the National Museum of the American Indian and was previously the long-term President of the Native American Finance Officers Association (NAFOA). Bill is also an Adjunct Lecturer at Stanford University and teaches Tribal Economic Development and Sustainability, and co-founded the Harvard Leading People and Investing to Build Sustainable Communities. He holds his Master of Business Administration (MBA) from Columbia Business School and his Juris Doctor (JD) from the University of British Columbia. 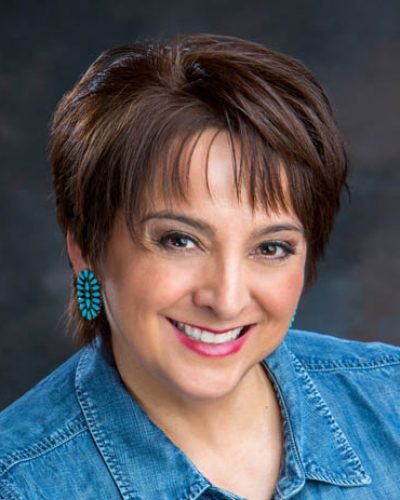 Ms. Poston is committed to inspiring tribal communities through culturally competent, community based approaches. She has over 30 years’ experience in public and community relations, marketing and branding, strategic facilitation and planning, event planning, and capacity building at the tribal, federal, state, and local levels. 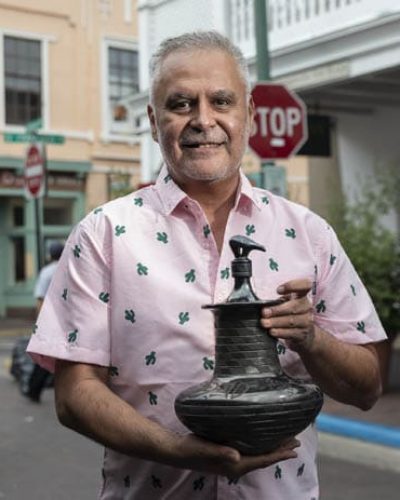 Russell Sanchez (b. 1963) continues to be one of the master innovators in Pueblo pottery. He creates each piece perfectly hand-coiled, stone polished, then etched, inlaid, designed, and fired with traditional Native American pottery methods. Russell learned to make pottery from his great-aunt, noted potter and pottery matriarch Rose Gonzales (1900-1989.) He started making pottery at the early age of 12 years old on the San Ildefonso Pueblo.

Russell has received numerous awards and recognition for his pottery throughout his career. Including such distinctions as ‘Best of Division’ at both the Santa Fe Indian Market and the Heard Indian Market. In 2007 Native Peoples Magazine presented Russell’s art in the feature article of the Fall issue. In 2011, Russell was awarded the exclusive ‘Tony Da Award’ for Pottery in Santa Fe. Russell was recently a recipient of the ‘New Mexico Governor’s Award for Excellence in Art 2017. In 2019 he won “Best of Pottery” at Santa Fe Indian Market. At the same time, he was involved in a major exhibition of historic San Ildefonso pottery at the Museum of Indian Arts and Culture in Santa Fe, NM. His work remains on a continued path of excellence and creativity. 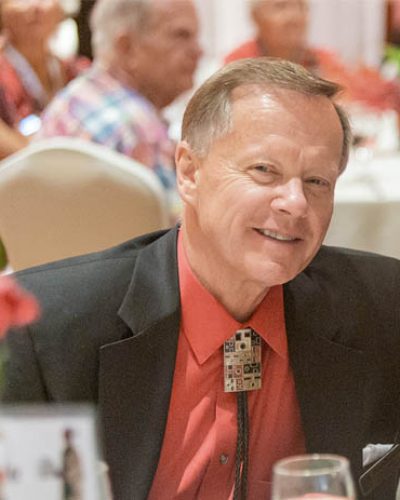 Tom Teegarden has over three decades business management experience in the public and private sectors with an emphasis on leadership and assembling high-performance teams for tribally owned enterprises. He is presently Vice President for High Water Mark, a Native woman-owned environmental consulting firm.

He brings experience in contracting, business and community planning, development, fundraising, budgets, operations and volunteer management to the SWAIA board. Throughout his career, whether in the startup or mature phase, he has helped organizations become bigger, better and more financially stable.

Tom’s interests range from competitive cycling to traditional Native music, and he is a member of multiple Native drum groups. He holds a BA from Dartmouth College and an MBA from the University of Colorado. 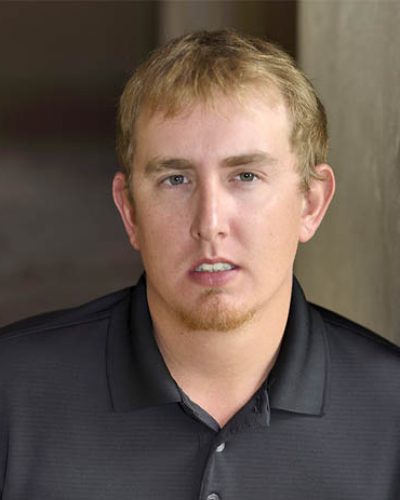 Chris aims to continue his family’s tradition and insure the survival of traditional techniques.